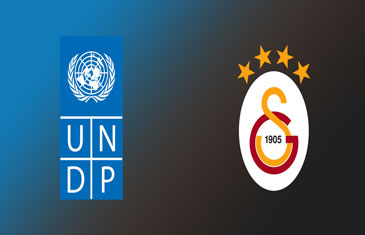 UNDP (The UN Development Programme) signed an agreement with Turkey’s Galatasaray Sports Club to generate additional momentum around the Sustainable Development Goals (SDGs), which aim to end poverty by 2030.

In 2015, the world adopted the 17 global goals to end poverty and hunger, empower women and girls, protect the planet, and ensure prosperity for all as part of a new global development agenda containing specific targets to be achieved over the next 15 years.

“Sports can unleash an incredible amount of positive energy for achieving great causes,” said Cihan Sultanoğlu, UN Assistant Secretary-General and Director of UNDP’s Regional Bureau for Europe and the Commonwealth of Independent States (CIS) at the signing ceremony. “With support from Galatasaray, the world’s anti-poverty efforts will get an enormous boost,” she added.

“We are proud the club’s reputation as a world-class football team, as an education institution, and as an international sports brand can help tell the world that ending poverty is possible,” said Dursun Özbek, the President of Galatasaray. “This is our chance to get people involved and make a global impact.”

At the signing ceremony, UNDP and Galatasaray also unveiled a public service announcement in which four players – captain Selçuk İnan of Turkey, goalkeeper Fernando Muslera of Uruguay, Aurélien Chedjou of Cameroon, and the Netherlands’ Wesley Sneijder — are seen kicking the ball and urging people to “leave no one behind” in four languages.

UNDP and Galatasaray will raise funds for a diversity of programs to tackle poverty, inequalities and exclusion across the world by organizing football matches and campaigns.

Galatasaray won the UEFA Cup and UEFA Super Cup in 2000, becoming the first and only Turkish football team to win a European trophy. The club’s logo is adorned with four stars, representing 20 victories in the Super League. Based in Istanbul, it also operates a large network of schools and sports facilities. The club has a tradition of embracing social causes in Turkey, having, for instance, set up aid campaigns for victims of a coal-mining disaster and flood-affected communities in 2014 and 2015 respectively.

UNDP has been using football to highlight important global issues, sponsoring an annual Match Against Poverty under the leadership of football legends Zinédine Zidane of France and Ronaldo of Brazil since 2003. The two players are UNDP Goodwill Ambassadors.

Want to join the discussion?
Feel free to contribute!