“Are we changing?” platform held its first event online on the World Climate day

With the joint initiative of Habitat Association, INGEV, and TEPAV, “Are We Changing?”, which creates awareness for individual and institutional change in response to climate change and highlights the steps taken in this field. Platform’s first event, the webinar titled “Fifth Season: Turkey Climate Policies,” was held online on May 15, 2021.

In his speech, Mr. Hazır pointed out that humanity’s new order after the Industrial Revolution radically changed the global climate compared to previous periods. He also stated that human-induced crises, especially the climate crisis, are deeply felt.

Vural Çakır, President of İNGEV, started his speech by emphasizing that projects against nature are damaging nature beyond measure and negatively affect low-income people.

Çakır: “We need to live a life in harmony with the environment to prevent this and developed countries are primarily responsible for this climate crisis and that this change should not turn into a mechanism that stops and also contains developing countries. The new growth understanding combined with digitalization can be realized with a compulsory and expensive process, especially for countries and companies trying to adapt to the Green Transformation. First and foremost, adapting SMEs to green transformation should be one of the urgent plans ahead.”

TEPAV Director Güven Sak highlighted that climate change is at the center of the world agenda and that we are now at the stage of doing instead of talking.

Sak: “Recovery after COVID-19 will be accompanied by a non-carbon-based growth and related technological renewal process. Yet it is imperative to ensure fair competition, fair transformation, and a fair transition environment between countries, companies, regions, and individuals. Turkey should ratify the Paris Climate Agreement as soon as possible because the Paris agreement is the constitution of this new world. Based on this agreement, a declaration of intent to reduce carbon emissions based on a new economic program should be formed as soon as possible.”

Following the opening speeches, the event continued with a presentation on “World Climate Agenda and Turkey” by Bengisu Özenç, Director of the Sustainable Economy and Finance Research Association (SEFIA).

Özenç stated that the Paris agreement prioritizes limiting the increase in the average temperature up to 1.5 degrees. Underlining that Turkey does not have a long-term low-carbon strategy, Özenç emphasized that such a strategy should form the basis of the development plan.

Nazlı Karamollaoğlu, TURKONFED: “A critical transformation process has been initiated within the scope of the European green consensus. The carbon regulation mechanism will seriously affect economic relations, and that this mechanism can be used as a growth strategy, not an obstacle. The metal industry, cement, and electricity sectors are at the forefront, and that SMEs, who are the suppliers of these companies, will have to change their systems.”

She also stated that the Paris agreement should be followed at the macro level in adaptation to the green economy and that employment policies should be regulated.

Nuri Özbağdatlı, UNDP: “The policy development process regarding climate change should be done towards reducing inequalities. Climate change is an issue of inequality, and that deep poverty has emerged with the climate crisis. SMEs are one of the groups that will be most affected economically, and that an approach should be developed for them.”

Özlem Katısöz, CAN-E: ” All energy policies of Turkey are now coal-centered and that its exit from coal is yet possible. When the necessary data were examined, Turkey could get out of coal within ten years and that new form of employment should be created by transforming this sector. Countries such as Turkey, which lack strategy, should first intend.”

Click on the link to watch the event (Only in Turkish) 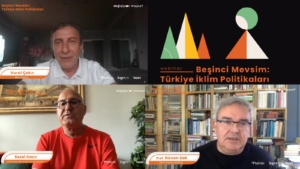 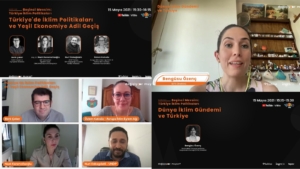