Having completed its perception research on Syrian refugees and shared with relevant nongovernmental organisation, İNGEV published the primary data of the research together with the invitation to use “cohesion language”

Main assessments obtained from the report prepared by İNGEV TAM (Social Research Centre) are as follows;

Humanity faced many experiments and accumulated much experience in regards to the state of people having to leave their countries. Presently there are 71 million refugees in the world. These experiences of humanity were accumulated inside the framework of the United Nations and were bound to rules aimed for resolution. Being a refugee was accepted as one of the most difficult statues in the world. Supporting these people to rebuild their lives became the fundamental principle of the policies. And nearly 4 million Syrians who sought asylum in our country had also remained at the centre of a conflict to which they were not directly a party.  They sought this asylum in our country after becoming no longer able to continue their lives in this environment of conflict within which many different organisations and states took sides. 47% of those who came to Turkey were children under 18 years of age. They constituted the vast majority together with the women and the elderly people.

Average age is 21 years, monthly income per capita is 252 TL

The average age of Syrians in our country being 21 arises due to the high numbers of children within the population. They live in households comprising of 6.2 people on average. Their monthly income per capita, with an amount of 252 TL, keeps them below the threshold of extreme poverty. Their best contentment in Turkey is that they live in a safe environment (without the threat of death) (84%). Their worst concern is the future of their families (71%).  Their religious beliefs and practices are strong (84%). Daily life communication is kept mostly among themselves. They have to provide their livelihoods based on unregistered employment and salary. Around 750,000 Syrians are employed through unregistered employment conditions in fields of activity that are usually not preferred by the local workforce. On the other hand, entrepreneur Syrians established more than 8,000 companies.

They sell their products mostly to the Syrian community and export mostly to countries where Arabic is spoken.

Vast majority of the Syrians in our country live without a citizenship status but instead with the identity document no. 99 through temporary protection status. This status prevents them from making any long term life plans. However, they have some basic rights and restricted freedoms based on both international law and our country’s legislation. As a reflection of the UN conventions, they have rights such as education, healthcare and employment rights. On the other hand they have restrictions such as having to live only in the country they are registered in, to obtain permission from the government authorities in order to travel from one province to the other, and to receive special permit in order to be employed, and they are unable to benefit from other citizenship rights and freedoms.

According to worldwide refugee experience, the inclination to return may be strong if the refugees live in special sites (camps) along the borders and the period is short (such as 1 year). However, if the period extends and they live side by side with the host community, this inclination to return declines. According to the studies conducted by İNGEV, the willingness to return if life went back to normal was 78% as of the year 2017. However, development of ordinary daily life conditions in Syria will take a long time even if the conflict atmosphere ends. The inclination to return among the refugees who begin to establish a new life in the host country during such long period occurs at low rates in practice. Many Syrian children in our country have become more fluent in Turkish reading and writing compared to Arabic. In the light of all these data, assuming that a large majority of the Syrians are to continue their current and next generations’ lives inside Turkey would be the most realistic analysis. It would be appropriate to consider the strategies and policies based on such assumption. It is not realistic to build the policies based on the assumption that the majority will return to Syria or be able to be forcefully sent back.

The Turkish-Syrian tension becomes more and more serious as the years pass. According to the most recent study of İNGEV in May, 48% of the public observes the Turkish-Syrian relationship to be among the tensest social relations. If we are to leave aside the political purposed tensions (between the ruling-opposing parties), the issue constitutes the most significant line of social tension. It has long surpassed the various differences formulated as Turkish-Kurdish, Sunni-Alevi, secular-religious. In addition to the factors such as economic issues and wage competition created inside the unregistered workforce market, the negative language constituted within various spheres in the recent months impact greatly upon the increasing tension. As only 14% of the Syrians consider they are in complete cohesion with the society of Turkey, 59% consider they were only partially able to become cohesive. Cohesion is our most significant issue. 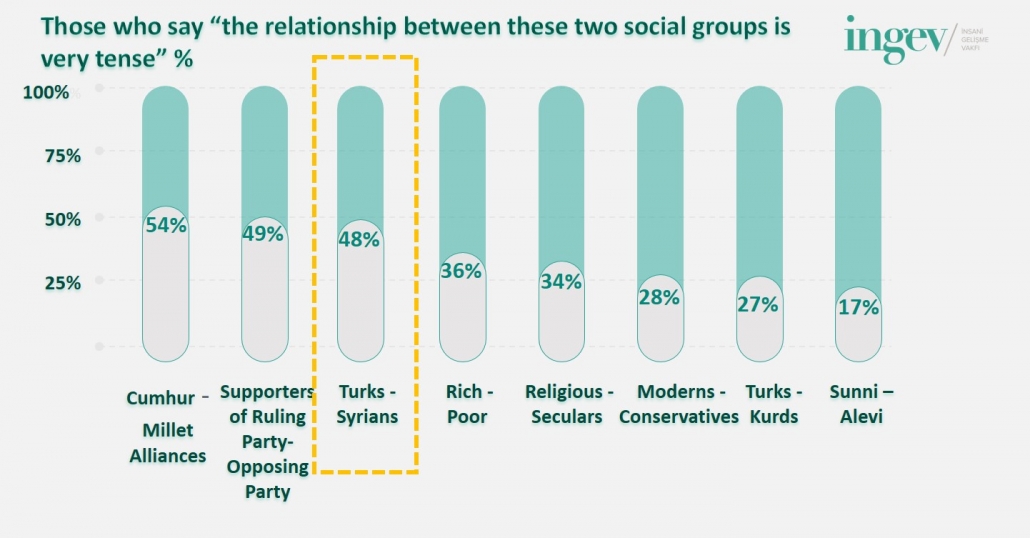 40% of the society appreciates the humanitarian approach of Turkey, 12% finds it reasonable for the Syrians to become citizens

In line with the trend of increasing tension, there is a declining trend for appreciating the humanitarian approach Turkey displayed in regards to this issue. 40% appreciate this approach. However, the majority support the idea of Syrians returning to their country. Those who say we have to work on their integration to Turkey constitute a ratio of 17%. An indicator to the negative trend in the perception is the inclination for crime. As it is the general case that the inclination for crime is lower within all refugee communities compared to host country citizens, the statistics in Turkey also do not reveal anything to the contrary of this case. However, 44% of the society believe that they are more inclined towards committing crimes. Another data points out again the distance between the host community and the Syrians. 55% of the society do not want their children to become friends with Syrians. This ratio ranks at the third place following homosexual individuals and groups supporting FETO (Fethullah Gülen Terrorist Organisation). 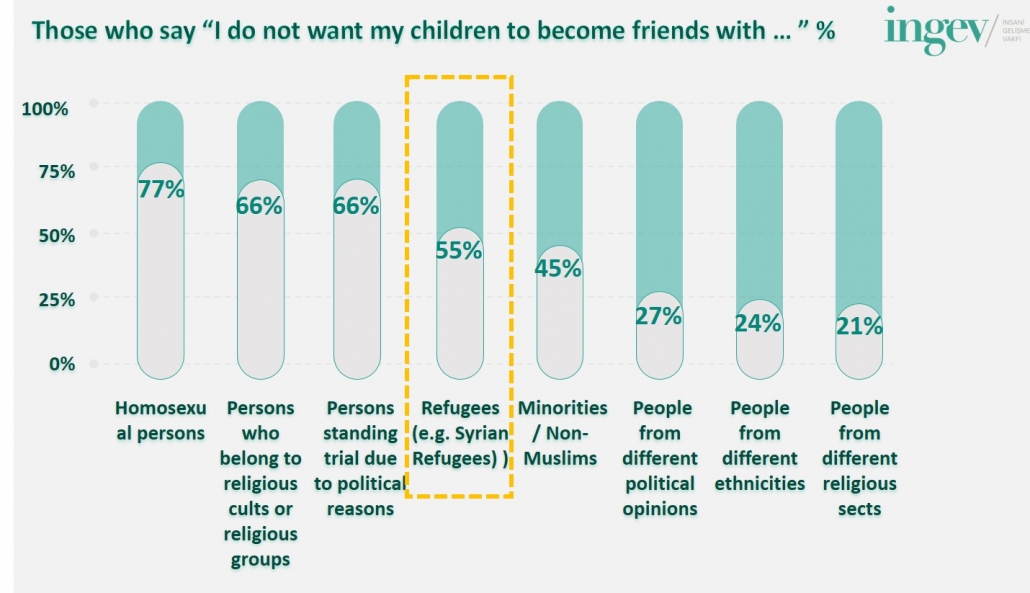 The issue should be handled with a humanitarian perspective

On one hand the Syrians that we live with and will live with and on the other hand the increasing tension reveal that a fault line of great significance for the future of our country is being formed. We have to become aware in time and through realistic policies we should prevent the formation of a heap of issues that will consume our country’s energy. We should be able to ensure through the maturity of a host country that the Syrians integrate into the life and culture of our country and their presence to become not a burden but a source of new diversity and energy. We should not permit formation of a Turkish – Syrian conflict like the formation of the Turkish – Kurdish issue in the past times. We should support cohesion not hostility in our cities, neighbourhoods and streets. Political preferences, positions and arguments should not forestall human development principles.

We should use the language of cohesion against othering and antagonising

The issue of the Syrians in our country requires first of all taking stance in line with humanitarian principles instead of making comments based on political positions. The attitudes and acts that collectively criminalise and antagonise religious or ethnic groups as a whole had been determinative in experiencing many painful incidents in the history of the world and of our country. The language used by the persons and organisations that have the possibility of influencing the public to be in support of cohesion is one of the most significant ways to prevent tensions.

We invite all political parties, media organisations, opinion leaders, and all who declare opinion in regards to the issue to use a language that alleviates tensions and supports social cohesion.