INGEV, with the funding and support of Save The Children, conducted an analysis of labour market assessment for vulnerable people living in Istanbul. The report titled “Gender Sensitive Labour Market Analysis” Report aims to empower economically vulnerable young females and males from refugee and host communities through decent work opportunities in order to realize their untapped potential, reduce inequality in their standards of living and contribute to economic development of the whole society. Besides that same report focuses on improving the economic conditions of displaced people in a gender-sensitive manner (i.e. gender equality in education, increasing women’s participation in the workforce, closing the pay gap between women and men, etc.) and look for opportunities to provide decent work both to women and men for more dignified, sustainable and satisfying labour conditions from a gender sensitive perspective.

İNGEV in its first year, has conducted HDI-D (Human Development Index-Districts) in local level in order to measure and monitor human development in 150 districts. By extending its scope, in the year 2017, number of districts reached up to 186. From this year onwards, HDI includes not only districts but metropolitan municipalities.

HDI Steering Committee was held at the Union of Marmara Municipalities. Metropolitan municipalities and districts, scholars, international institutions, NGOs and private sector representatives shared and exchanged ideas about the scope of HDI-D and HDI-M (Human Development Index-Metropolitan). The scope of the research will expand now with new indexes and data resources. The efficient usage of these mediums by the districts in micro-level and it’s being supported by central government and other shareholders increase the quality of life.

İNGEV and UCLG-MEWA recently signed a cooperation agreement to assess UN Sustainable Development Goals as local metrics in relation with HDI-D and the implementation of HDI-D in different countries of Middle East and Western Asia. HDI Steering Committee also shared their thoughts on which fields HDI-D and UN SDGs can match and which data source can be measured. 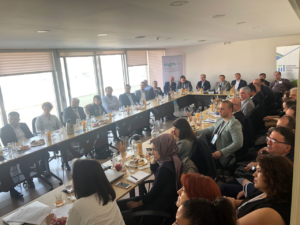 In the context of EBRD supported “Business Development Mentorship for Syrian Companies” project, İNGEV brought together Syrian SMEs which INGEV provides mentorship services for with İTO (Istanbul Chamber of Trade) and KOSGEB (Small and Medium Enterprises Development Organization of Turkey), the meeting was hosted by İTO.

Opening speeches for the meeting hold at İTO were given by İNGEV’s Director Berk Çoker and Burak Öztemel from the İTO’s Project and Business Development Directorate.

Following the speeches, İTO representatives informed Syrian SMEs about the history, corporate structure, activities and events of İTO. Moreover, İTO representatives gave a presentation on the Trade Ministry’s trade incentives, credits, and trainings and symposiums organized by the Chamber.

İNGEV and UCLG-MEWA will work on the assessment of the Human Development Index-Districts (HDI-I) as metrics in which the UN Sustainable Development Goals are measured and implemented in different countries in the Middle East and West Asia Region.

İNGEV and UCLG-MEWA, the most important organizations in their fields, aim to strengthen these efforts in the field of supporting local governments.

İNGEV hold an inauguration meeting of Business Development Mentorship for Syrian Companies project which has launched with the support of EBRD (European Bank of Reconstruction and Development) with an active participation.

Opening speeches of the meeting were made by the İNGEV’s president Vural Çakır and EBRD National Programme Manager Serpil Çetinçift. In the follow up session, İNGEV’s Director and advisory board member Berk Çoker informed participants about the details of the project.

The project, which brings together Syrian SMEs from various sectors in Istanbul and Mersin, and mentors who are prominent representatives in their sectors aims to introduce new business networks. In addition, the project supports the capacity increasing activities in the fields of advertisement, business development and sales. 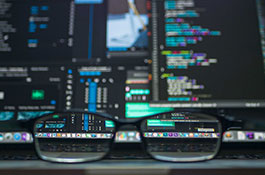 Syrians established companies have great impact in increasing Syrians contribution to Turkey’s economy and businesses as well as to strengthen social cohesion and integration. In the last years, Syrians have the highest percentage of foreigners establishing companies in Turkey. Taking these into consideration, İNGEV Social Research Center (TAM) conducted a study updating the database of Syrian companies. Accordingly, the contact details of a total of 6,106 companies were updated .

The development and updating of the database will allow Ingev to proceed with more effective initiatives and projects for Syrian SMEs.

In addition to contributing to the national economy and employment, it is also important in terms of exports to Arabic-speaking countries and the development of relations with the emerging Syrian diaspora.

İNGEV Social Research Center (TAM) completed a needs analysis based on interviews with 130 Syrian companies. According to previous studies, there has been progress in financial coverage, but entering the Turkish business eco system remains a fundamental need.

among the most frequently stated needs of the Syrian companies in Turkey is first the Access to   new capital resources (58%) and to new customers (45%). The report summary will soon be available on the İNGEV website. 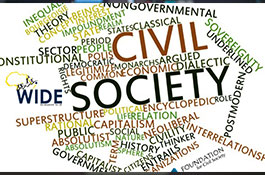 Non-governmental organizations play a key role for a healthy social development and peaceful democracy. The contribution of individuals to social life and the ability of executives to formulate decisions with the participation of the society is possible through NGOs.

NGOs can also play an important role in solving many problems that the government has difficulty in intervening. In some European countries, one  of the condıtıon to be elected as a member of the Parliament, is to prove that you have been workıng actively with the NGOs for a certain period of time . In our country, different NGOs are developing with a technician quality and being politically independent. However, it is also known that the number of NGOs who have intertwined with politics increased and they actually have easier access to public resources. On the other hand, the fact that some NGOs played a role in the preparation of the July 15 attack on democracy created a disruptive and polemic question for the NGOs. İNGEV TAM has prepared a research report on the image of NGOs in public. The report shows that half of the population do not believe in the importance of NGOs and the other hald thinks that NGOs play capital role. His report based on the field study in Turkey will allow civil society organizations to make important inferences. 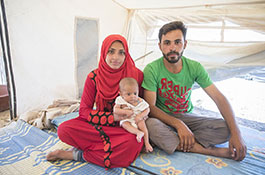 Turkey played a key role in a very critic human question as it received more than 3.7 million Syrian refugees. A population of this size, of course, brings with it many issues, especially social cohesion. Stable strategies, clear applications and large resources are needed. In addition to these efforts for refugees, the attitudes and behaviors of the host nationals are decisive. Particular attention should be paid to the tensions that may occur between refugees and the hosting community  in a period when our country is going through  economic bottleneck and when the unemployment reaches high levels.

There is a need for political parties and  leaders to approach the issue with an extraordinary care, to use harmonious language and avoid any provocative speech. İNGEV based on the field work conducted by our field researcher, was able to evaluate the perceptions of our society to Syrians presenting a research report.

In our country, the relations between Turkish citizens and Syrians are among the very most tense social relations as described by our report that is only shared with organizations that may be directly related, because of the sensitivity of the topic. 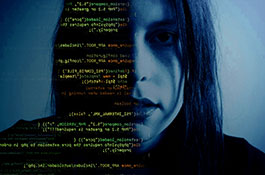 İNGEV TAM completed the research report on Cyber ​​Violence. The prepared report based on fşeld research showed that our awareness of the topic is relatively low. Individuals are inadvertently experiencing cyber violence or vice versa, take part in applying cyber violence. We are in the stage where the majority of the society is using mobile and smart phones and in the other hand where the age of use is getting smaller.

The İNGEV Tam Cyber Violence Awareness Report gives us a clue to a potential road map while in the same time determine our current stage in this concern. According to the research, 73% of the public stated that they did not know or knew little about behaviors that could be considered as  Cyber Violence.

Raising awareness is the first step in preventing unintentional cyber violence or against the inability to use defense and protection options in cases of cyber violence. İNGEV plans awareness raising campaigns by evaluating results and clues given by the report.

As INGEV, we conducted 6 trainings between February and April 2019. Over 1000 applications were received, 158 Syrian owners, company managers and potential entrepreneurs benefited from our trainings in 6 cities.

Trainings were given in İstanbul, Mersin, Hatay, Konya, Kayseri and Bursa. The training topics consisted of trade language and culture in Turkey, leadership and team building, social media and digital marketing and lastly, presentation techniques. With these trainings, participants will be able to contribute to the capacity development of their companies.

The work of INGEV GDM (INGEV Entrepreneurship Support Center) is known by many Syrian businesses and SMEs throughout the country. Syrian companies are getting in touch with us to receive consultancy services on different topics while potential entrepreneurs contact us to establish their companies. We, as INGEV GDM, carry out information meetings in cities where Syrians live intensively in order to announce our activities to a wider audience.

Our last meeting was in Şanlıurfa, where most Syrians live after Istanbul. The opening speech of the event, which was held under the auspices of the Sanliurfa Chamber of Industry and Commerce, was made by İbrahim Halil Peltek, Chairman of the Board of Directors of ŞUTSO. 35 Syrian business owners attended the meeting, while the financial and legal consultants of INGEV GDM answered the questions of the participants.

As you may well know, “Capacity Building Trainings for Syrian Entrepreneurs” have been ongoing for the last 2 months. We started our trainings in Istanbul on February 21-22 and our trainers Levent Özkula and Evren Doğanç offered 4 different modules to our beneficiarie.

The modules are the Commerce Language and Culture in Turkey, Leadership and Team Building, Corporate Communications and Digital Marketing for Company’s and Presentation Techniques. More than 1000 applicants came to the trainings, 158 people were benefited from these trainings. Training participants consisted of Syrian company owners, business executives and potential entrepreneurs. The rate of female participants was over 25% per city. 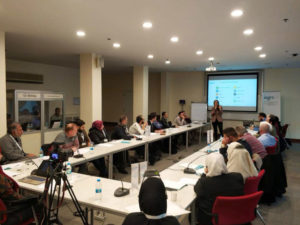 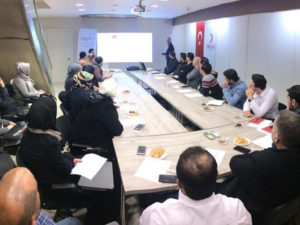 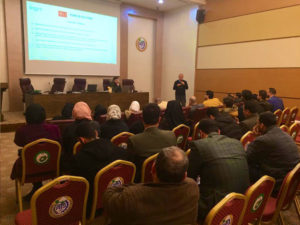 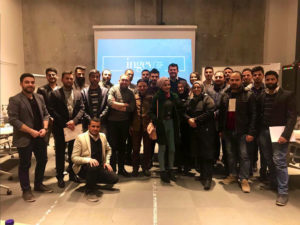 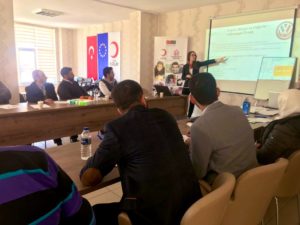 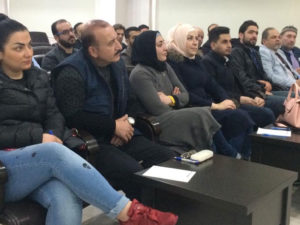 On April 9th, INGEV, Building Markets and Habitat Foundation organized an eco-system meeting under the auspices of TOBB with the participation of Turkish and Syrian entrepreneurs.

The opening speech of this meeting was given by TOBB Head of Sectors and Entrepreneurship Department, Ozan Acar, Director of Building Markets Turkey, Saral Virgo, The Director of INGEV, Berker Coker and Chairman of the Association of Habitat, Sezai Hazır.

Following the opening speeches, Acar took over the meeting as moderator. He talked with the successful women entrepreneurs of Turkey.

The senior women managers of Turkish NGO’s shared their ideas about what are the needs of more integrated entrepreneur ecosystem. 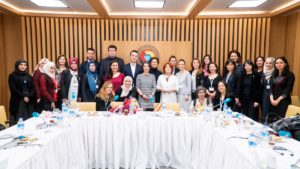 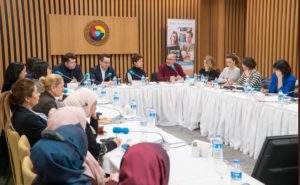 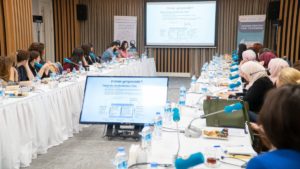 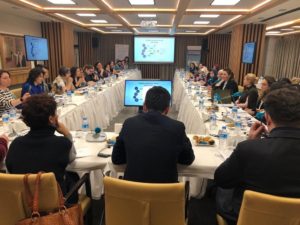